skip to main | skip to sidebar

Pam and Carmen have an adventure!

An adventure of a life time. Or so we thought?. . . . .It all started on the morning of December 4th, a chilly, but sunny Saturday morning. Carmen and I left my house at approximately 6:45 am. We knew we weren’t on any tight time schedule and several bathroom breaks and perhaps some shopping along the way would be in order. The start of the “adventure” began two hours when we were unsuccessful in finding the Queensbury outlet stores, . . .but on the bright side, had a lovely drive through the old historic downtown Glens Falls.
About three and a half hours later we arrived at our hotel in the Tarrytown area, (which, since took a chance and purchased it on hotwire, was not the hotel we wanted.) After a yummy lunch at 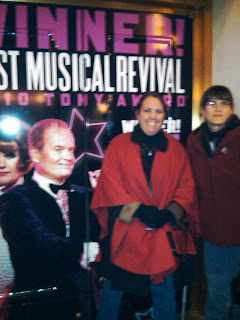 Eldorado’s in Tarrytown, we decided to take the train into New York. Since the street, where we knew we could park was up hill, we decided to park in the Walgreen’s parking lot. (big mistake!)Leah had warned us that there was a 30 minute parking limit, but since there were no signs in the far end of the parking lot, we thought it would be safe to park.
Once in the city, we met up with Leah and proceeded to the TKS line in Time Square to procure half price theater tickets. After hours of waiting, and as we got to to the from of the line, we were told we could have gotten to the front of the line, with Carmen's handi-cap status . . .oh well. After a nice Italian dinner, we went to see ‘La Cage aux Folles” starring Kelsey Grammar. . . very funny.
P.S. After the long train home, we walked back to out car to find it was wearing a boot! 20 minutes later and $70 later we were finally on our way home back to the hotel! 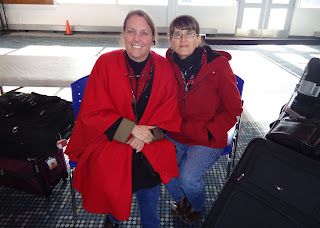 Today should have started with us having a relaxing breakfast and then finding our way into the city to get on the ship. However, due to a crane accident when the boat was in dry dock, there was no ship to get on. Plus there was no place in our paperwork that indicated which pier we needed. So after driving around Manhattan and a few phone calls we found our way to the pier. Once there, amongst all the screaming of frustrated angry passengers, we were sent to the Sheraton in Times Square for the night.

Here we are waiting to find out where they were going to send us for the night.

We decided to take advantage of our extra day in the city by venturing into the fashion district, where Carmen bought some beautiful wool flannel to make a cape. Then we hiked a few more blocks down 7th avenue to see Leah at Mustang Sally’s.

Day Three, Monday December 6: We started the day with room service breakfast, which Norwegian is supposed to cover. We called Norwegian about our credit due to the shortened length of the cruise and we were upgraded to a balcony cabin! Woowhoo!! We took a Taxi to the ship, and imagine our excitement when it was actually there at port! 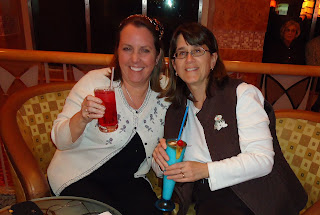 We tried to check into our upgraded cabin, only to be told that it was already occupied, so we checked in with our original cabin number. So we had a cocktail while we waited for them to work things out.

Once in board, I stood in line at the customer service desk until we got the upgraded cabin.
We got to our stateroom, our bags came with out much delay, and life was good. We were on the ship, and our vacation was finally starting. We had dinner at the Asian restaurant, a combination of sushi and Asian Fusion. It was very nice. We topped it off with a trio of crème Brule: Green Tea, Red Bean, and Ginger

The show for the evening was a comedian and a magician. We found the magician funnier that the comedian, but they were both great. In the spirit of the ship, we decided for fun to make our own towel animals. (I know, don’t quit our day jobs ) 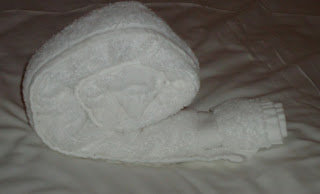 Tonight's towel animals: Snail with no head & snake.
Day four, Tuesday:
Our Day at seaToday we started the day with deep tissue massages in the spa. At one point I thought I had lost my cell phone, only to find it later in the trash. . . phew!!After the spa, I went to the gym to work out & Carmen went to a cooking demonstration. This was held by the ship’s head chefs and they showed how many of the ships dishes were prepared. They even shared many of their recipes! After lunch at the buffet, I retreated back to our cabin, to resume work on my book.
Carmen went for the “free” bingo, after a half hour of selling raffle tickets, and other foolishness; she played her free game, and didn't win. L
This was dress up night, so we did, and had our pictures taken. We decided to have dinner in the French restaurant, and again, the food was excellent. The show was a musical review of 70’s music. We were all singing in our seats. 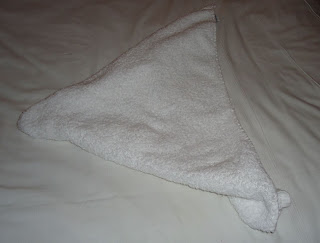 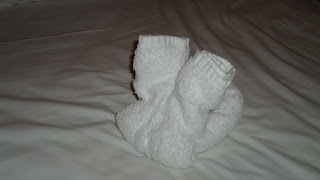 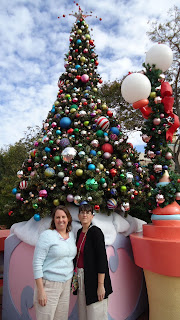 In Port CanaveralToday we decided to go to “Islands of Adventure” which is part of universal studios. The new Harry Potter ride was open and we liked it so much we went on again! We did a few other rides, but the Harry Potter and Spiderman rides were our favorites!

When we returned to the ship, we were pretty wiped out and happy to be back at the ship again.

After a light dinner, we crashed for the night.

No show, no towel animals. .

Great Stirrup Cay This is a private island owned by Norwegian. It’s a beautiful island, with white sand beached and crystal teal water and a locals straw market. We each got “bahama mama” hair braids by the ladies in the straw market. We had a relaxing day reading and soaking in the views.

Once back at the ship, we dressed for dinner, and ate in one of the main dining rooms. I had the scallops with cheddar cheese grits, and Carmen had the tortellini . . . mmmm

The show as the comedian and he was even funnier that earlier in the week. We then saw that last bit of the Glen miller tribute before heading back to the cabin. 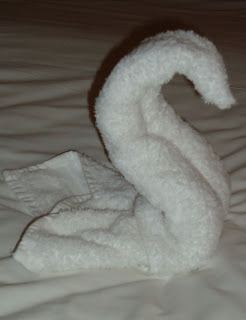 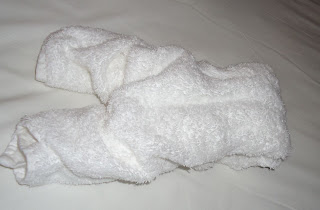 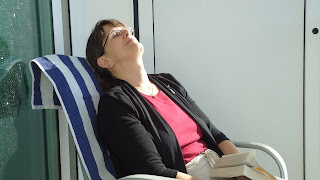 At Sea As we have every day, I started the day by working out, while Carmen read and relaxed in the room. We went on a bit of a shopping spree, we sewed and started Carmen’s wool cape and polished off a nice bottle of chardonnay

We had an amazing dinner at the Italian restaurant. And enjoyed the comedy/magic show of Jean Pierre Parent ( who we think might be a long lost cousin on Carmen’s!! Day 8: Our last day at seaToday we had a bit of excitement as a coast guard helicopter hovered over our balcony as they came to retrieve an ill passenger.

We finished Carmen’s wool cape, and went to two shows all before dinner. The first was another comedy/magic show by Jean Pierre, and then we were entertained by the crew with their own review, which was both entertaining and funny.

On our last dinner on the ship, we ate at the Teppanyaki restaurant. We sat next to a couple from Montreal named Paul & Priscilla. We hope to get together with them once we all get home.

We returned home son Sunday the 12th, relaxed. rested and ready to go back to work.
What I found is this cruise will be the perfect ship and itinerary for our next sewing cruise!

Posted by the decorating diva at 9:55 AM No comments:

the decorating diva
I've been blessed with too much energy, just enough creativity, a fair amount of common sense, and absolutely no idea how to get everything done that's on my plate! To learn more about window treatment retreats, sewing projects, Serger workshops, zentangle and more, visit my main website: http://www.pamdamour.com/